I meant to add this as a short post script to the previous post about the football game, but forgot.  Last week I played the $50 tournament at my local casino.  I went out in about 25th place when I checked my option in the big blind with A-10.  I had about 12 big blinds remaining.  The flop was 10 high rainbow, so I bet $1,200.  The dealer for some reason announced my bet as $3,300. The next player to act put out $3,500 before I could correct the dealer. The dealer informed the player my bet was really $1,200 and he said, "Okay, I raise to $3,500.  It folded back to me and since I would only be left with about $4,000 if I called, I shoved and the other player insta-called.  I turned over my top pair top kicker and he revealed...aces.

The really interesting story from this tournament happened at the table next to mine though. One player at the table was trying to play the role of table captain.  You know the type...trying to call out people's hands, making big bluffs and showing them, chiding other players for folding, and just generally trying to control the action and get under the skin of the other players so they'll call him down light.

In the critical hand the table captain was heads up with an older gentleman who could best be described as nitty.  The old man seemed to be taking a while to make his decision when the captain said, "I'll call whatever you bet." In response to this declaration the old man immediately said, "Okay, I'm all in," and pushed his chips forward.

The table captain starts to muck when the dealer says, "No, you said you would call whatever he bet, you have to call." The captain says, "The action wasn't on me, so that's not binding."  The dealer called the floor who listened to all of the involved parties and then called over the other person working the floor that evening.  They conferred and declared the captain had to call.  It wasn't all of his chips, but it was a significant amount leaving him pretty short. He of course complained rigorously using some colorful language in the process claiming that this ruling was different from "every other poker room in the entire country."

The poker room at Prairie Meadows fairly recently moved from a separate room on the 4th floor of the complex to the casino floor on the 2nd level.  This means it is now under the control and management of the woman that runs all of the table games.  According to the poker dealers she is a very "take no shit" kinda gal.  She just happened to be checking in with the poker room staff when this all went down and told the guy to watch his language and drop it.  The ruling has been made and isn't going to change, so let it go.  She gave him one warning and said if he cursed again or brought up the ruling again he would be asked to leave.

He made it about 3 hands before he brought it up again and she immediately swooped in and said, "That's it. You're done let's go." And then she and a security guard escorted him out and his small stack was left behind to be blinded off.

I've never seen anybody get kicked out of a tournament that cheap before, but the dude was really fired up. I mean I get that he disagreed with the decision, but it's a $50 tournament and wasn't for like a $1,000 pot in a cash game or something.
Posted by JT88Keys at 10:02 AM 3 comments:

The Thrill of (near) Victory and the Agony of Defeat

Wow...it's been about a year and a half since I last posted here.  Guess I finally did something exciting enough to share. My 24-year old son and I made the last minute decision to head over to Iowa City for the Hawkeyes' prime time show down with the Nittany Lions of Penn State. I know a lot of Hawkeye fans who thought we would probably get blown out by PSU like we did last year at their place, but I had faith that the magic of Kinnick Stadium could help the Hawkeyes keep it close if not win outright.

We decided we were going to make a day of it and go over early and tailgate even though the weather was predicted to be unseasonably hot for late September. I borrowed my sister-in-law's portable DirecTV satellite setup and we reserved a portable generator from the local A to Z Rental.  I took care of the menu and sent my son to buy the beer since he is a Cicerone certified beer expert that is the bar and restaurant manager of a Flix Brewhouse here in Des Moines.

We met at my house at 7 am and filled up the cooler and then headed to the grocery store to grab a few last minute supplies and then dashed over to the rental place to pick up the generator.  We stopped to put fuel in the generator and to buy a couple gallons of extra gas just in case to make it through the afternoon and were on the road by 8 o'clock.

We got to Iowa City about 10 am and parked at the Finkbine golf course about a mile or so from the stadium. It was already plenty hot at 10 and we were both fairly drenched in sweat by the time we had everything setup about half an hour later.  It took about 30 minutes for the satellite dish to get all dialed in to the satellite signal and we cracked our first beer (and ice cold bottle of water) at about 11:15. 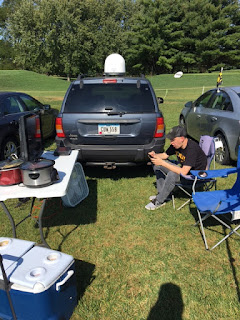 The one piece of tailgating equipment we didn't bring was a tent for shade.  We don't own one and I couldn't find one to borrow on short notice.  I was too cheap to spend the $100 or so to purchase one at Sam's Club, but we figured we could tough it out with enough cold beverages and a couple of box fans. We were wrong,

We were able to steal some shade from our neighbors, but by noon the sun was so high you couldn't get shade unless you were directly under their tent.  We had a bite to eat and watched all the early start college football games up until halftime and then we started discussing options.  We finally decide to pack everything up and head downtown to grab a beverage and some freshly prepared food. My son booked an uber to take us downtown and we decided it was the best $25 either of us had ever spent.

We killed about 3 hours downtown bar hopping and then caught the free shuttle from the old capitol building to historic Kinnick Stadium.  We arrived just in time for the band's pregame performance and then it was game time.  I won't go into a lot of details about the game, but suffice it to say the Hawkeyes played one of the prettiest ugly games.  They gave up tons of yards, but almost no points...just a field goal and a safety in the first half.  Iowa scored a late TD after an interception to make it 7-5 despite about a 225 yard difference in total offense.

The second half was a nail biter with Iowa taking the lead 19-15 with about 1:50 to go.  Our D had been keeping their offense somewhat in check so I was feeling pretty good about our chances to maintain that lead and win the game.  PSU worked the ball down the field and scored the game winning TD on 4th and goal from the 7 yard line as time expired. They were required to line up for the point after attempt, but they just took a knee after which their QB punted the ball which drew a chorus of boos from the Kinnick crowd. I heard he spent the first two minutes or so of his ESPN post game interview apologizing for it, so good on him I guess.

It took us about an hour and a half to walk back to our vehicle and escape the crowded parking lot.  Thanks to the close finish almost nobody left early so it was congested. 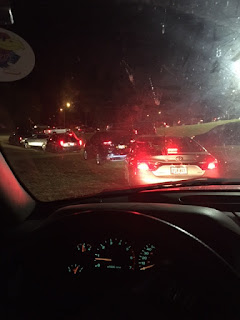 All in all it was a great day even if we got our hopes dashed right at the end.  The Kinnick crowd was raucous and loud and our beloved Hawkeyes proved they can play with a top 5 team.  They have a few winnable games in a row now, so I believe they can contend for the Big Ten West and maybe a potential rematch with Penn State or OSU in the championship game.

P.S. If you haven't seen it yet, the Iowa Hawkeyes started a new tradition that we're really proud of. The brand new childrens hospital was just completed adjacent to Kinnick Stadium.  The top floor facing Kinnick is like a giant press box designed so the very sick kids and their families can watch the home football games.  At the end of the first quarter the whole stadium turns and waves to the kids in the hospital as a show of support for what they're going through.  Since it was a night game they added the flashlights from their cell phones to make it an even cooler experience.
Posted by JT88Keys at 1:21 PM 3 comments: