Last Saturday morning I got up early and put a cut up chicken, onion, celery, carrots, garlic, parsley, salt, and bay leaves in a pot to simmer for my homemade southern style chicken and dumplings. I settled into the couch to watch some English soccer and get ready for the third day of March Madness when my cell phone rang.

It's rare that my phone rings since it's used most often for text messages, tweets, and web surfing, but it's even more rare that it rings that early on a weekend. It was a close friend from Kansas City. He had just called me a couple of weeks ago when he was making a last minute trip up to Des Moines, so I figured he was calling about something similar. I was wrong.

Chris asked, "Where are you?" I said, "Sitting in my messy living room with food on the stove. Why?" He didn't beat around the bush, "Dave died last night." It felt as if I had fallen from a great height. "What? How? What happened?"

Dave was my very best friend for a large part of my life. We met in 5th grade band when all of the area elementary schools came together for an all district concert. We both played french horn and hit it off immediately. It seems almost everyone has that one friend through middle school and high school that if they aren't at your house, then you are at theirs. That was Dave.

We were high energy kids who got in trouble for talking and goofing off, but we weren't troublemakers by any stretch. We were in band and choir together. We double-dated for every single high school dance. I drank my first beer with Dave. He got a six pack of tall boys from his Cousin Jim and we drank them as fast as we could behind the dock at the building where we worked in the summer. I was with Dave the very first time I threw up from drinking. Coincidentally the same night as the six-pack mentioned above.

After high school we roomed together in college and contributed to each others' poor decisions that led to both of us being asked to take a semester off to "re-evaluate our academic goals." Neither of us ever returned to college. We got an apartment together and both got a job at the same fine dining restaurant. Dave eventually got let go because he couldn't stop himself from telling the Maitre D' exactly what he thought of him.

After going through a few mind numbing office jobs Dave decided that he needed a new adventure. He joined the Marines in 1989 and completed his training just in time to get deployed for Desert Storm. Dave was in a Marine heavy weapons platoon that was attached to the Army's Big Red One 1st Mechanical for the short, but intense battles that took place after the U.S. began their ground campaign against Saddam's troops in 1991. He never talked much about what he saw or did while there, but he was never fully the same after he returned.

After we both married and had kids we drifted apart. We would still get together when old friends would come back to town and it was always like no time at all had passed.

It's been 5 days since he died and we still don't know exactly what did him in. He went to bed about midnight and about 4 AM his girlfriend (he and his wife divorced a couple of years ago) realized he wasn't snoring so she checked on him and he was gone. The autopsy results won't be back for a while, but everybody who knows him well knows it will be somehow related to his drinking.

Dave's ex asked our friend group if we wouldn't mind saying a few words about Dave at the funeral service. I told her I would try. I'm a big crier. I get choked up at songs all the time, so trying to speak at the funeral of one of my best friends in the world was sure to turn on the water works. I finally decided that I didn't give a shit if I cried in front of a bunch of strangers.

I got up and talked about what good friends Dave and I were through high school, college, and after college. I told everyone that my list of really close friends is very short so losing one of them hits  extra hard. I wanted to depict for them how Dave was the type of guy that would do anything for his friends and always had your back. We shared a love of movies and could hold a complete conversation just in movie quotes, so it was apt that I used a movie reference to make my point. If you've seen the movie "The Town" you'll remember the scene where Ben Affleck goes to Jeremy Renner and asks in his Southie accent, "I need your help with somethin'. We're probably gonna have to hurt some people and you can't ask me about it later." Renner thinks for about half a second before asking, "Whose car are we takin'." That was Dave. If you needed his help with anything he didn't stop to consider the consequences or costs. He just showed up and did whatever needed doing.

Today they buried him with full military honors at the Iowa Veterans Cemetery. It still is surreal to me that one of my closest friends is really gone.

Here are Dave and I just out of college doing what we did best at our first apartment. Dave is on the left and I'm on the right. In the last photo Dave is predictably in the center of the action and I'm on the right again.  Rest in peace, friend. A lot of people will miss you. 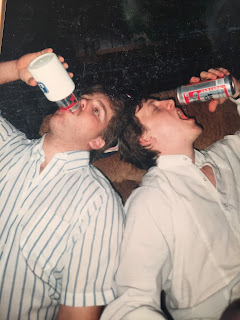 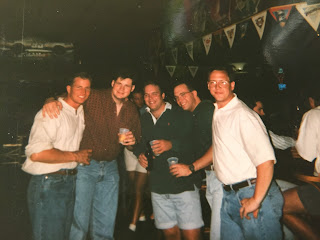 Haven't posted in a while.  I have to feel motivated to share a story and tonight that just happens to be true. I'm a small time gambler and definitely not a pro like some other people u see. I work a 9 to 5 job for a big company and only gamble when I feel like a I have a couple of bucks that I can spare.  I never gamble money that would keep me from paying my bills, so it's not consequential except that I'm a competitive person and I would rather win than lose, ya know?

So it's Friday night in the booming metropolis of Des Moines, Iowa. I decided to take $100 and head on out to Prairie Meadows Racetrack and Casino and try my luck at the tables. The plan was to play a little blackjack and if I happen to double up or more I would take it up to the poker room and play a little 1-2 no limit hold em.

I arrived at the casino and headed up to their "Sports Pit" on the Mezzanine Level. It's the non-smoking area and on Friday and Saturday night is the only place you can usually find cheap blackjack. As I approached the table there was one guy sitting in the third base (last) seat playing by himself heads up with the dealer and he seemed to be doing well. They were almost to the end of the shoe so I waited patiently before sitting down.

I took my place in seat 3 of 7 at the table and the dealer started to shuffle. Just then a couple starts to sit down at the Mississippi Stud table next to us and asked, "What kind of blackjack is this?" The dealer and floor person redirected them to our table. They started to sit down in seats 1 and 2. The guy playing the third base spot kind of raised his eyebrows at them, colored up, and skedaddled.

The older gentleman of the couple says to his friend (date? co-worker?) or whatever she was that they should move so they'll have more room. I almost moved to third base to let hem have more room at the end of the table where they had already set up shop and really wish I had. The gentleman took the last seat and the woman sat down to his right.

Let me take a moment to say that I normally don't get too worked up over people that play blackjack in a non-traditional way. I try to play optimal strategy and figure they're mostly just hurting themselves if they don't play that way too.  I figure there is just as much chance that their unconventional methods could help you in the end as hurt you.  But sometimes somebody does something so shit all stupid that you can't help getting a little worked up.

I don't count cards when I play. As I said before I try to play optimal strategy and I utilize a betting strategy that is meant to maximize the effect of winning streaks and minimize the effect of losing streaks. It goes like this: as long as I keep winning I bet 1 unit, 3 units, 2 units, then 5 units. Then I just bounce back and forth between 5 units and 2 units until I lose a hand. If I win 4 hands in a row then I will have won 8 units. Tonight I was playing $5 so it was $5, $15, $10, and $25.  If I lose multiple hands I just keep betting 1 unit until a winning streak starts.

The table didn't start out well. The couple were playing super unconventional, but were mostly just standing when they should be hitting which is kind of the lesser of two evils when it comes to dumb play. I've lost down to my final $10 of my initial $100 buy in and I went on a streak. My bet is all the way up to $25 and I'm dealt a 4 and a 5.  The woman to my left has A6 and the guy has K5. The dealer is showing a 6. I double and draw a 10 for a total of 19. The woman hits and draws a face card and stands on 17.  The older gentleman decides to hit his 15 against the dealer's 6. The dealer sort of asks, "Hit?" before granting him another card and sure enough he taps the table and says, "Hit."

He gets a 7 to bust and the dealer rolls over a 4 under his 6.  He then draws a face card for 20 to beat both the woman (who had $5 at stake) and me (who now had $50 on the table).  If numb nuts had just stood like he is supposed to I'm back to $105. Instead I'm walking away from the table with steam coming out of my ears with a single red bird in my hand after muttering something like "You've got to be fucking kidding me."

Did any of you figure out the title? With baseball season just around the corner and my beloved Cubs favored to win it all (I'll believe it when I see it) I had to throw in a baseball reference since the error by third base cost me $100 and E5 is the designation on the score card in baseball for an error by third base.
Posted by JT88Keys at 6:48 PM 7 comments: